SPEECH AT THE 20TH JUBILEE CONFERENCE CO-ORGANIZED BY THE INSTITUTE OF ECONOMIC SCIENCES OF THE POLISH ACADEMY OF SCIENCES, OCTOBER 25, 2021

The Belt and Road Initiative (BRI) is one of the most significant infrastructural projects worldwide and a chance for the Chinese photovoltaic cells industry to scale up and expand into new markets. From 2000 to 2019, this industry became a global leader in capacity, export, employment and innovative technology implementation.

My study aimed to evaluate the Chinese photovoltaic cells industry development in the years 2000-2019 and identify the modern trade patterns and opportunities for this industry alongside the Belt and Road Initiative, especially in the context of intra-industry trade relations. The methods applied in this research included analyzing the Grubel-Lloyd trade index and net export volumes, which allowed me to evaluate and recognize potential trade partners for this technologically advanced industry.

The research revealed that the Chinese photovoltaic cells industry underwent substantial changes due to significant state interventionism and implementation of the energy transition policy assumptions. The development of this industry translated to the growth of electricity generation from solar power from less than 1 million MWh in 2000 to over 224 million MWh in 2019. Furthermore, Malaysia, Thailand, and the Republic of Korea accounted for 92.70% of the total imports value of photovoltaic cells in 2019 among the BRI countries. The highest export value of this category of products was associated mainly with the trade relations with the following BRI countries: Republic of Korea, Ukraine, Pakistan, Portugal, Chile and South Africa. Moreover, based on the export data from 2019, the most significant intra-industry trade potential for Chinese photovoltaics was represented by Indonesia, the Philippines, Thailand, the Republic of Korea, Malaysia, Czechia and Singapore.

In conclusion, Chinese authorities should accelerate transportation and logistics infrastructure reinforcement (mainly maritime routes through the South China Sea and the Java Sea, and the inland infrastructure). Besides, the Grubel-Lloyd trade index analysis revealed the potential of two-way trade with some EU countries, so the economic and trade cooperation should be tightened and deepened in the export and import of photovoltaic cells between China and the EU. My research, by the Grubel-Lloyd trade index application, contributes to a better understanding of the potential two-way trade between China and other Belt and Road Initiative countries in the context of the rapidly growing Chinese photovoltaic cells industry. 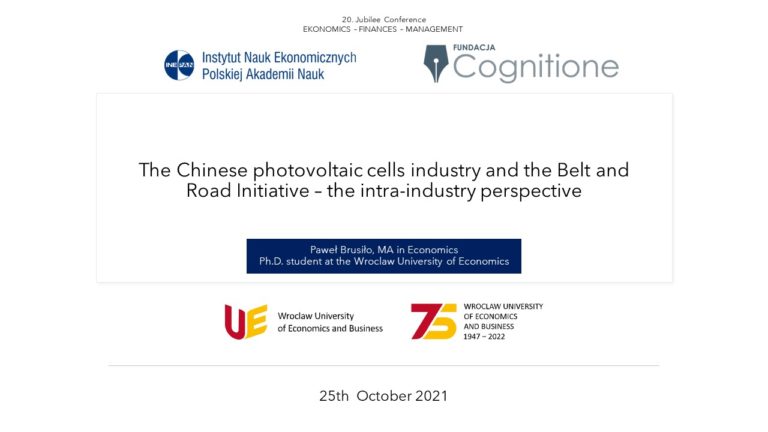